skip to main | skip to sidebar

Edit: The problems referred to below have now been resolved. A normal service is expected to run tomorrow morning.

Owing to a line side fire at the Hawthorns all Chiltern trains are suspended between Birmingham Snow Hill and Kidderminster.  Disruption is expected until 09:00 01/10.

Tonight, local bus services are conveying passengers between Birmingham Moor Street and Kidderminster in both directions until further notice.  Arrangements have been made for Chiltern Railways rail tickets to be accepted for these journeys. 4M, 9, 53, 80, 87, 120 and 127. Ticket acceptance on all London Midland trains via any reasonable route is in place until further notice.
Posted by Central User at 9:28 pm No comments:

And now for something completely different

Where does one start?

Well, "It was a dark and stormy night" would be one way but, to be frank, that's a bit passé. so, i guess I'll have to think of something else.

How about "The sun was shining and Elsa decided to go for a walk along the beach."?

I think that is a little better, it has moved on from just describing the weather (a very British pastime) to something else.

How about, "Alphie was still feeling cross so, as the sun was shining, he decided to go for a walk along the beach to see if it would calm him down."

Why was Alphie cross? What does the weather have to do with anything? Would a walk along the beach calm him down?

Alphie was still seething after last night's argument with Elsa.  He didn't understand why she had got so upset.  After all, he was only going to be away for three months.

Elsa had stormed out in a rage and hadn't come back.  With no idea where she had gone, or when she would be back, Alphie was frustrated.  He didn't want to leave things like this, but his flight was due to leave at lunch time.  He needed to get out.  He needed to clear his head.

Elsa meanwhile had other things on her mind.

The evening had gone badly. After what had seemed like a perfectly normal start to a Saturday night, Alphie had told her what he planned to do the next day.  It had come as a complete surprise.  Actually, it wasn't a surprise, it was a massive shock.  They had had a massive row.

What a complete bastard.  How could he even think of doing something like that?  It was pure selfishness.  They had been making plans together for months.  Now this!  She had to get out.  Away.  Away from the devious little shit that she thought she loved.

She screamed.  She hit him.  She slammed the door and she ran.  She had no idea where she was running to, but as she ran out into the storm, tears was streaming down her face.  Elsa was not thinking straight.  She just wanted to run... and run she did, straight from one nightmare into another.

Posted by Central User at 4:10 pm No comments:

Many a true word is spoken in jest

Apparently the phrase is derived from one originally written by Geoffrey Chaucer in the 14th Century.
Anyhow, it is most apposite in respect of the following, which I re-found today.
Corporate life is often completely bonkers. Mine is.
CU

In the beginning was the plan.

And then came the assumptions.

And the assumptions were without form.

And the plan was without substance.

And darkness was upon the face of the workers.

And they spoke among themselves saying,

"It is a crock of shit and it stinketh."

And the workers went unto their supervisors and said,

"It is a pale of dung and none may abide the odor thereof."

And the supervisor went unto their managers and said,

"It is a container of excrement and it is very strong, such that none may abide by it."

And the managers went unto their directors, saying,

"It is a vessel of fertilizer, and none may abide its strength."

And the directors spoke among themselves, saying to one another,

"It contains that which aids plant growth and it is very strong."

And the directors went unto the vice presidents, saying unto them,

"It promotes growth and is very powerful."

And the vice presidents went unto the president, saying unto him,

"The new plan will promote the growth and vigor of the company, with powerful effects."

And the president looked upon the plan and saw that it was good.

This is how shit happens.

Posted by Central User at 5:45 pm No comments:

To someone of my generation, Haw Haw means something to do with the Second World War.

On Tuesday, I discovered that haw-haw is a noun for something completely different. The full effect has to be seen from the opposite side - it really is quite effective. Unfortunately the house is not mine. I was a car park attendant! 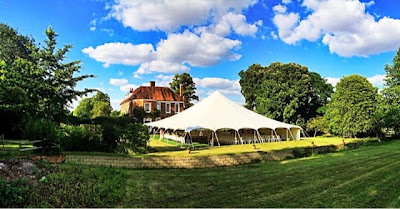 Posted by Central User at 5:53 pm No comments:

Overnight, there has been a cable fire just outside London Marylebone. This means that the signals don't work, so there are no trains running to or from Marylebone at present.

The situation could change during the day, so check before you travel.

Information is also available via the National Rail Enquiries website.

Edit: 1038. It appears that some trains on the High Wycombe line may be starting / finishing their journeys at Wembley Stadium station. However connections by public transport there are poor into Central London (and it won't be all trains anyway. It is STRONGLY RECOMMENDED that passengers follow the official advice and travel directly to West Ruislip for travel to railway stations along the High Wycombe line.

Edit: 1345. Most trains towards London (on the High Wycombe line) are currently stopping at South Ruislip to drop off for connections to the Central Line. Trains out of London however are still picking up at West Ruislip. It is clearly proving difficult to run all trains to time - many have extra stops, so allow plenty of time and expect delays.

Edit: 1630. The Central Line is currently suspended between Westbound between Marble Arch and a White City. Not good news for Chiltern Railways passengers trying to get to West Ruislip.

Options seem to be:
The day just got worse.

Edit: 1715. Unsurprisingly, the Central Line suspension between Marble Arch & White City is now both ways. Expected to last until 1900 but no guarantees on this.

Edit: 1745. It appears that a through service has now resumed on the Central Line. Severe delays are reported at present.

Email received at 1920 from Chiltern Railways re tomorrow morning:

Marylebone station is closed due to a cable fire. Around 2 metres of signalling cable in the tunnel into the station has burned away meaning the signalling system is not working. Without signals we cannot safely run trains, so are not running to or from Marylebone until new cables are installed and tested. Engineers are on site however, disruption is expected and Marylebone will be closed into Monday morning and until further notice.

We strongly advise passengers to avoid travelling on Monday unless essential.

Final Edit: 2320. Marylebone is not expected to open in time for the Monday morning rush hour. An emergency timetable has been published for the Amersham line. The Wycome line version will hopefully be out in the next hour or so.

Posted by Central User at 9:31 am No comments:

I received this email yesterday from TfL.

"I am writing to let you know that from Sunday 6 July, all our buses are going cash free so you will no longer be able to use cash to pay for your bus fare in London.

I understand why they've done it, but don't feel particularly comfortable with the changes.

As the tourist season has got into full swing (is there such a thing in London?), I have recently noticed an increase in the number of passengers paying for their bus fares with cash. Certainly more than the 1% of passengers who supposedly do so.

The changes will happen and will not be reversed - I think there needs to be a digital brand campaign for Oyster targeted at overseas tourists. Too many have no idea of what their optimal ticketing arrangemts ought to be when visiting and traveling around London.
Posted by Central User at 10:26 pm No comments: